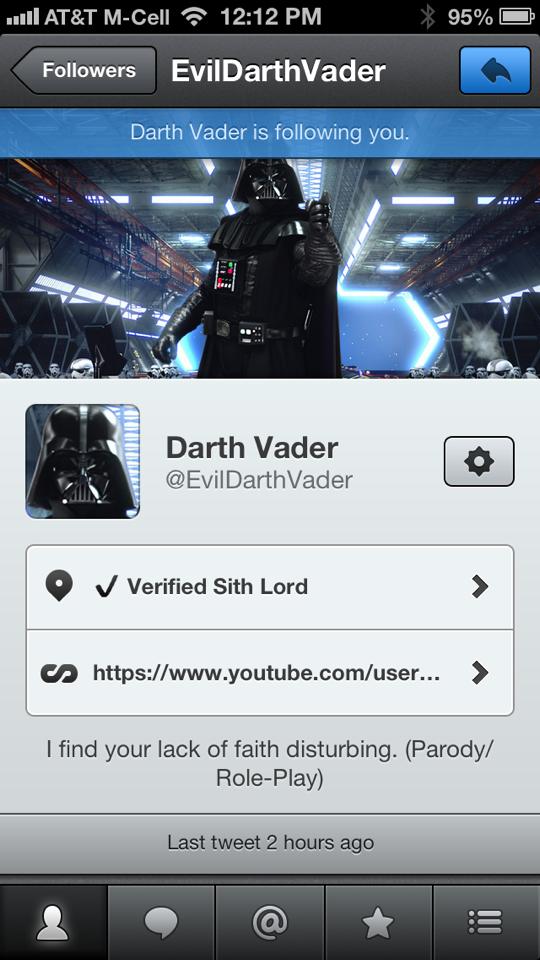 Approximately one month ago, I wrote a blog post entitled “The Bacon Kitty George Takei Star Wars Experience” about my definition of social media.  A few weeks prior, I had also titled a post, “Your Professional Network is Powered by Bacon.”  After doing this, an odd thing happened.  In the statistics for my website, “bacon” became the most frequent search term directing traffic to my site.

The following are the search engine term statistics from my site for the past 30 days:

When I wrote these posts, I purposefully used terms and memes that I knew were common drivers of traffic on the web.  I did this as a joke in the post, and to make a point, but I was surprised by how effective they truly were (and are).  In fact, one commenter on my site stated the following: 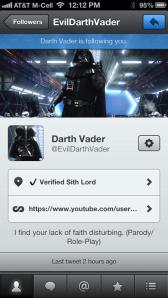 Well, he was right.  Not only does the search term “bacon” now drive traffic to my site, but Darth Vader also decided to start following me on Twitter shortly after I posted with the words “Star Wars.”

I think my first takeaway from this experience is this: Search engine optimization, using the right hashtag, and tagging your social media posts with the right terms MATTERS.  This is not really surprising, but what is surprising is the serendipitous connections that may come out of them.

Let me provide you with an example.  I have an Instagram account and I recently started going back and hashtagging some of my old pictures to make them more visible.  Over the previous winter holiday period, I had stayed with a friend who works for the traveling Cirque Du Soleil show, Totem.  While in Atlanta and Miami, I took a number of pictures of the Cirque Grand Chapiteau (big top tent).  I went back and tagged these photos with terms like #Cirque, #CirqueDuSoleil, #Totem #Circus, etc.  Within a few hours, Yann Arnaud liked my picture and left a comment (see/click below right).

I don’t know Yann…  I’ve never met him…  But because of my tagging, he was able to find my photo.  As it turns out, Yann is one of the artists in the “rings trio” act for Totem.  He’s also an avid photographer (follow him on twitter, Instragram, see his website, and support his art here).  Through something as simple as hashtagging my social media posts “correctly,” even months afterwards, I was able to connect with someone new and share a mutual interest and experience.  Imagine how cool it would be for a Totem audience member to have one of the artists in the cast “like” their photo and interact with them.  It’s a win for the audience member, who has an amazing story to tell, a win for the company/show, that gets free word of mouth, and a win for the artist, who gets to promote their work.

(Shortly after writing this, my pictures were also picked up by another Cirque Du Soleil Totem performer, see/click left.  Whomever does social media in Cirque Du Soleil corporate sure is training their artists well, or else the artists are learning this on their own… which is also great… and entrepreneurial.  Social media has been a boon for artists and other independent creatives as a way to directly engage with their audiences and fund their work (think Kickstarter and other crowdfunding sites).   In a future post I’ll comment on this and other individuals and companies that are getting social media right.  Hint hint… jetBlue is one of them…)

The above example is one of many serendipitous experiences I have had.  I’ve also had conversations with Keaton Simons, one of my favorite musicians, won concert tickets, and met a new rocket scientist friend with whom I’ll be vacationing in Vegas with this summer.  My second takeaway from this experience is this: Too often when it comes to social media, people give up too quickly.  They may post once or twice, but seeing “no point,” or receiving “no likes” or “no comments” as a result of their actions, they give up.  One of the cardinal truths about social media is that the more you put out there, and the more you engage, the more you will get back.  Don’t give up!  Learn what “works” and join the masses.  You’ll be surprised as to what happens.  As the New Radicals sang in the 1990s, “you only get what you give…”