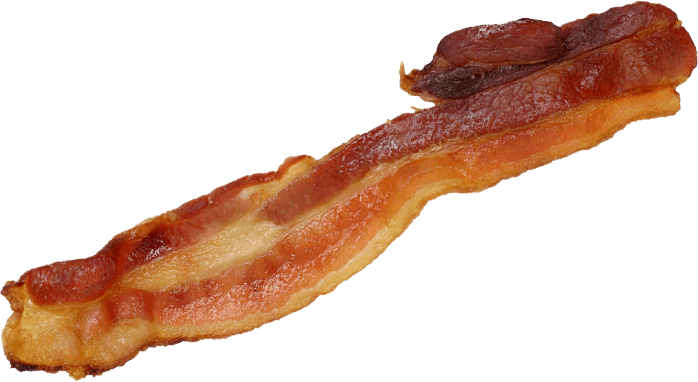 Last week I started an experiment called the “6 Degrees of Esther Lloyd-Jones Project,” a play on Six Degrees of Separation and the popular “Six Degrees of Kevin Bacon” game.  I was motivated by the desire to see how small the student affairs profession is and discover the power of crowdsourcing on the internet.  It’s still ongoing, so please visit the page and keep contributing!  A week in, however, I wanted to share with you some of the learning I gained in starting this project.  There are far too many outcomes to list in one blog post, so stay tuned for more.  Also, I will most definitely be turning this into a professional conference presentation.

For this project, I wanted to see how many degrees of separation others and I had back to Esther Lloyd-Jones, one of the authors of the 1937 Student Personnel Point of View and a “founder” of the student affairs profession.  I created a page on my website, provided some background, developed some ground rules, and created a GoogleDoc where others could add their own connections back to Esther Lloyd-Jones.  I released it on social media last Wednesday (April 10, 2013).  The landing page for the project can be found here.

Within minutes I started getting tweets, Facebook comments, and a large number of hits to my site.  People began sharing these and it increased yet further.  As you can see from the following images, my web traffic exploded and my Klout score began to rise.  (Klout is a service that measures your “influence” on the internet.  The more likes, retweets, mentions, etc. you get through social media, the higher your score.) 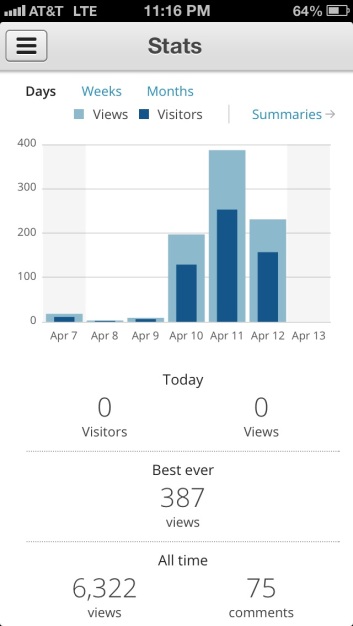 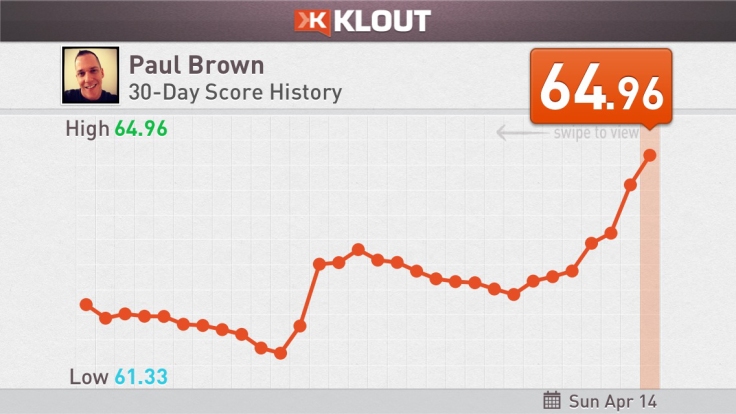 When I released the project last week, I posted it to Facebook, Twitter, LinkedIn and Google+.  I have nearly 1000 Facebook friends, many of them professional connections, 400 Twitter followers, 400 LinkedIn connections and about 100 Google+ connections.  I also posted it to popular student affairs twitter hashtags such as #studentaffairs and #sachat.  True to my previous experience in releasing my blog posts over social media, Facebook proved to be my most powerful platform, producing nearly 70-80% of the hits.  Knowing this, I also used Facebook’s “pay to promote” feature to increase my reach and get the post at the top of people’s newsfeeds.

What was also interesting, however, was the number of hits I received when I sent the project out over the CSPTalk faculty list-serv (curated by the ACPA Commission for Professional Preparation, a collaboration of student affairs faculty).  This produced the most noticeable effect (see Thursdays site stats above) and also allowed me to complete one-degree separations from Esther Lloyd-Jones (presumably because faculty are likely an older demographic and thus more likely to have these connections).  Making these one-degree connections was critical to this project as they were the nodes that could produce even more branches off of the tree.

So what have I learned from this little experiment?

Knowing your audience, knowing where there are large pockets of communication networks, and knowing when and how to post something is incredibly important.  As I have evolved with this project, I have learned what networks are the strongest for me and how to post to them in such a way that increases my reach.  (For instance, including the word “bacon” in the title of this blog post was highly intentional… bacon gets clicks.) I also learned to not discount the “old school” method of information sharing such as through email list-serves.  If one begins to look at everything through the lens of a “social network,” one begins to realize that it’s not just limited to Facebook and Twitter, but also email, personal conversations, and perhaps even snail mail.

2.  A professional network built up over years is incredibly powerful.

I constantly stress to my master’s students that they need to network, network, network.  This is also often reinforced with informational interviews they do with other professionals.  Some of the best connections I was able to make came from my friends who knew someone who knew someone.  They also were willing to help by sharing my tweets and Facebook posts.  Building a network that is this strong and this broad takes time.  Social media helps in maintaining those connections in ways that were previously impossible.

3.  Connections come in the most unexpected of places.

As the project has unfolded I began to uncover previously unknown “loops” in my professional network.  Some of these connections I knew, and some of them I didn’t.  For example, after I posted this, one of my friends who I worked with at Miami University in 2003, Jon Reardon, suggested I reach out to Denny Roberts, another professional I knew from my time at Miami.  Almost before I could contact Denny, Katie Wildman, who I had worked with at the University of Alaska-Anchorage, suggested I also speak with Denny.  Katie now works with Denny in Qatar (yes, Qatar int he Middle East!).  Then, my friend Heather Shea Gasser, who I’ve worked closely with through a professional association, ACPA, chimed in because she and Jon Reardon had worked together at the University of Idaho.  Heather is also connected to Denny Roberts through some of her professional work on globalization.  Kind of confusing isn’t it?  Although I knew some of these connections existed, this project has just reinforced how small the profession I am in really is.

As of this writing, the project continues to unfold.  In fact, I don’t know if it will ever truly be “done.”  What has been so interesting for me is that it has produced both “outcomes” and what I call “meta-outcomes.”  In terms of outcomes, I am helping others record history and learn about their own professional pasts.  What I call “meta-outcomes,” however, are what I have learned about the functioning of networks and social media.  As this project unfolds, I continue to learn more.  I can’t wait to share what I’ve learned through blogging and a presentation at a professional conference next year.  Stay tuned!