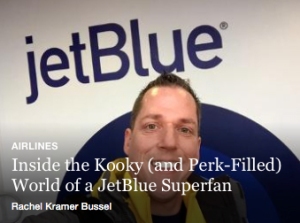 I was featured in a Yahoo Travel article highlighting some of my fun adventures with JetBlue.  It’s truly been a fun-filled amazing adventure…

Inside the Kooky (and Perk-Filled) World of a JetBlue Superfan

Some people become fans of Star Wars or the Seahawks or Taylor Swift. But Paul Gordon Brown’s fandom has taken a different approach: He’s arguably JetBlue’s No. 1 fan, and the company, in turn, is happy to be his social media BFF. How happy? When Brown recently tweeted, “I keep telling people, ‘I have a hot date tonight.’ Translation: I’m flying @JetBlue. :)” the airline wrote back, “Blushing! Thanks!”

How did the airline win him over? The Boston College PhD student’s JetBlue obsession started by accident. He’d booked a trip to Hawaii with another airline, which bungled his reservation so badly he canceled it and rebooked on JetBlue (which partners with Hawaiian Airlines). Then he took to Twitter. “I first discovered how different JetBlue was when I tweeted them and another airline due to some poor service I experienced,” Brown told Yahoo Travel. “The response was telling. The other airline’s tweet read like a machine-generated form letter. JetBlue’s tweet was personal, and they let me know they were ‘#superexcited’ to have me fly with them.”

He was so impressed with the airline’s service that he embarked on a travel binge big enough to cure a very broken heart on April 11, 2013. During his journey, JetBlue’s locations helped steer his course. He took 31 trips in the first year, and since then, he’s taken more than 100 flights, covering 125,000 miles. “There was only once out of my 100-plus flights that I had a flight attendant that did not live up to their reputation. I think she was just having a bad day. It happens,” Brown says. “When you experience such great service, it becomes easier to dismiss the occasional anomaly.”

But it was more than just the service that kept him returning to JetBlue, which accounted for 53 of the 65 flights he took in his first year of travel bingeing. “My social media relationship with JetBlue has definitely made me more loyal. I liken it to going on a road trip with friends. Everyone is a potential friend; my JetBlue friends just happen to be virtual. JetBlue’s Twitter team have become my invisible travel companions.” The feeling is mutual, with JetBlue giving him repeated social media shout-outs. When Brown Tweeted a Valentine’s Day poem to them, they made a one-of-a-kind PB&J badge for him as part of their frequent-flyer Badges program (Brown is the current #1 badge earner).

Other unique perks have included a Venti Starbucks mocha, hand-delivered to him after he tweeted about being frustrated because he hadn’t had enough caffeine. It’s the people behind the brand that have made him an ever-loyal customer. “The staff take a pragmatic approach and are empowered to fix things without the standard lines and rules you typically get with other carriers. I don’t expect them to do anything fancy for me every time, but they have definitely added to the surprise and delight I have found in my travels.”

With that kind of personalized service, it’s no wonder his devotion to their brand is such that he’ll go out of his way to fly JetBlue, “within reason.” “If a flight is significantly more expensive, then I will go with another airline. That doesn’t happen often, though,” says Brown. “Sometimes flying to the closest JetBlue city, renting a car, and driving to my final destination is actually cheaper than flying another airline to a smaller airport.”

But Brown didn’t simply fly anywhere and everywhere; he chose destinations that spoke to him and offered him something he couldn’t get at home in Boston. Prior to his binge, he took about 8-12 flights a year, but wanted to take advantage of his grad student schedule. “There will likely not be another time in my life that gives me the flexibility in schedule to be able to do this again,” he told Yahoo Travel. “When I first started traveling, it was about running away from something. When I was in a different city, I felt better. I forgot about my worries. When I returned to Boston, those feelings returned. So I booked another trip. And then another one. Along the way, I healed. It changed from running away from something to running towards something.”

He picked his destinations with the goal of discovering new venues and being able to stay with friends and keep costs down. “I delight in finding the offbeat in my travel,” Brown explained. “The International Bowling Hall of Fame? It’s in Dallas. Marvin’s Marvelous Mechanical Museum? Detroit. My favorite adventure was on Oahu in Hawaii, when I traveled to see the YMCA camp that was the set of the Others’ village on Lost. I completely nerded out.”

The obvious question to anyone with wanderlust is: If you’ve got a favorite airline, as Brown does, how can you maximize your travel dollars? One step is to use their service frequently. “I became intimately familiar with their pricing structure. One trick I use is to take advantage of my ability to cancel flights without a financial penalty. My frequent-flyer status allows me to do this, so I will often book a flight, wait until a sale, check if the price has dropped, and if it has, I’ll cancel and rebook at the cheaper price.”

Brown is appreciative of his special status, but said others can follow in his footsteps — or at the very least, have fun trying. “I’m not special. JetBlue has been known to do these things for lots of travelers. I just happen to fly them more.”