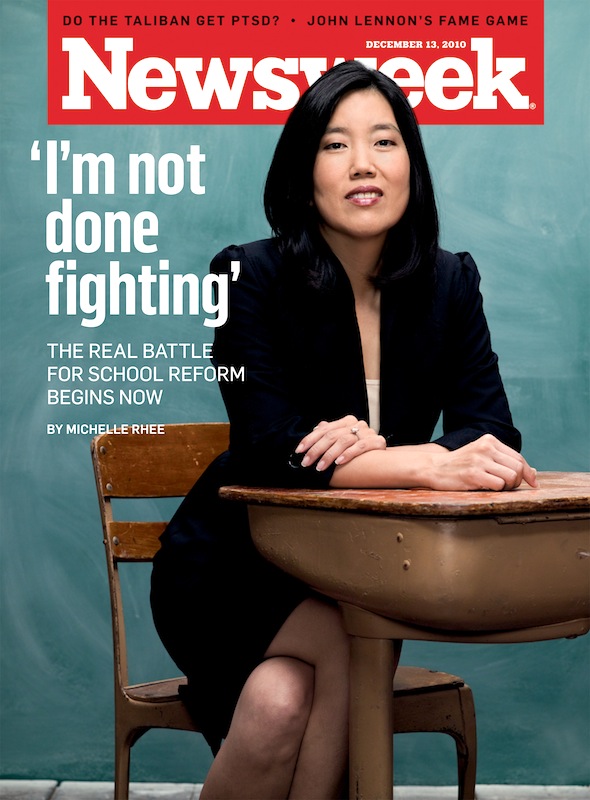 Education Radicals: An Evolution of Image

At left, Michelle Rhee’s Time Magazine cover from 2008 when she was Chancellor of the Washington, DC schools.  At right, two years later in 2010 after she resigned from office.

Education and politics are littered with change sagas and heroes.  I find individuals who enact radical change, however, to be particularly interesting.  It always intrigues me how the image of these public figures evolves over time.  They often undergo the journey from being viewed as controversial autocrats to being hailed as trail-blazing visionaries (well, at least the “successful” ones, anyway).  When confronted with these stories, I always wonder if I would possess the strength to endure the public scrutiny and be up for the challenge of being one of these change agents.

In one of my recent classes, we utilized a case study of Bennington College, the subject of a New York Times article by Mark Edmundson in 1994.  Bennington College underwent a radical mission and fiscal reboot in the early 1990s.  Lead by President Liz Coleman, who still holds the office today, the College terminated numerous faculty members, ended their presumptive tenure system, reduced tuition costs and created a unique scholar-practioner-lead student-driven interdisciplinary curriculum.  The original proposal that lead to these changes can be found in the Bennington College Board of Trustee’s Symposium Report.

Although controversial at the time, the changes at Bennington were by-and-large a great success.  What is more interesting, however, is the transformation of the image of President Coleman.  In reading the 1994 New York Times article, one would get a very different image of the woman who, today, is a featured speaker at TED.  She “changed” from a tyrant to a savior.  She is now seen as a visionary on the future of liberal arts, higher education and public service.  (A quick Google search will demonstrate what I mean.)

I can’t help but make a parallel between the Coleman’s image transformation and that of the former chancellor of the DC Public Schools, Michelle Rhee.  During her tenure in office, Rhee made radical and controversial change.  The Time Magazine cover above shows the stern, “cleaning house,” Michelle Rhee.  After the defeat of DC Mayor Adrian Fenty in 2010 (which some attribute, in part, to his support for Rhee’s changes), Rhee resigned from office and went on to found StudentsFirst, a political organization promoting education reform.  Notice how the “updated” Newsweek cover portrayed her sitting at a desk, smiling and approachable.  I LOVE it when I find images like this.

Whenever I’m confronted with stories and images like this, I always wonder:

What about you?  Could you be the next higher education radical?

← You’ve watched TED Talks, but have you read the new TED Books? [UPDATED]
My Teaching Philosophy →