The Only Life and Social Media Maxim You Need To Know 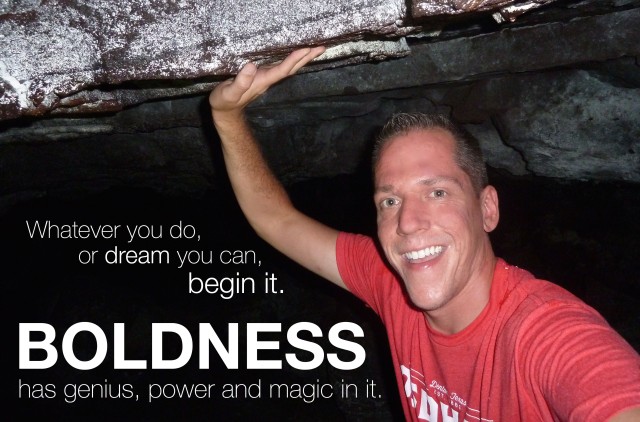 (Picture above from the Kaumana Caves on the Big Island of Hawaii.)

Knowing of my adventures in the past year, one of my students shared a passage with me from W. H. Murray’s The Scottish Himalaya Expedition from 1951.  The passage reads:

Until one is committed, there is hesitancy, the chance to draw back, always ineffectiveness. Concerning all acts of initiative (and creation), there is one elementary truth, the ignorance of which kills countless ideas and splendid plans: that the moment one definitely commits oneself, then Providence moves too. All sorts of things occur to help one that would never otherwise have occurred. A whole stream of events issues from the decision, raising in one’s favour all manner of unforeseen incidents and meetings and material assistance, which no man could have dreamt would have come his way. I learned a deep respect for one of Goethe’s couplets:
.             Whatever you can do or dream you can, begin it.
.             Boldness has genius, power and magic in it!

The “couplet” Murray refers to is actually a loose translation of Goethe.  It is often misattributed to him, but the sentiment is what matters most here: kismet can be profoundly powerful and it can be encouraged and influenced if you aren’t afraid to take action.  I am not a strong believer in fate, but I do believe that the effects of “putting yourself out there” can seem almost magical.  I’ve discovered it in my travel and I’ve discovered it in my engagement with social media.

When I consult and speak to audiences about their social media usage, I find great variance in their participation and engagement online.    One of the classic concepts in online engagement, the 1% rule, attempts to explain this phenomenon.  The 1% rule holds that 90% of internet users are “lurkers” who passively consume content, 9% are contributors that create and post content occasionally, and 1% are heavy contributors, or the ones who dedicate their lives to writing Wikipedia entries.  (I jest, but it’s not far from the truth.)    Although many now question whether this concept has outlived its usefulness or if the numbers have shifted, the idea itself, which Jakob Nielsen referred to as “participation inequality,” is still useful.  It is a helpful reminder that we engage in different areas and communities, online and off, in different ways.

In my experience, however, a vast majority of people still do not contribute or engage in ways that leverage the immense hidden power of the social web.  They also may not act boldly in life in order to unlock new possibilities and options.  Engaging on social media strategically and publicly, and being more adventurous in general, can result in seemingly “magical” outcomes.  For example, within the last year, as a result of my online engagement, I have met new friends, went on a tour of a Navy destroyer, enjoyed free tickets to a Cirque du Soleil Show, and received a job offer in Silicon Valley.  All of this happened because I was bold.  I was also bold “offline” in my travels.  I set out on adventures with a loose idea as to where I was going and let things happen along the way.  As a result of this boldness I’ve found untold natural beauties, eaten at oddball restaurants, and even discovered the world’s largest patio chair.  The more bold you can be, the more that will come back to you.  It’s true in life and it’s true with social media.  You only get what you give.

Where can you be more bold?
What’s holding you back?