At least that I know of.

Yesterday, I went to a Facebook friend’s profile and noticed that we no longer friends.  The last interaction we had was last week in some Facebook comments regarding an article I posted on issues of race in America.  It wasn’t an article about Michael Brown or Eric Garner, but a post by a professor at Vassar College detailing her experiences of racial incidents in and around the college. (My Vassar College ID Makes Everything OK)

In going back and forth with my friend in the comments, the friend pressed me to explain “how racism doesn’t exist for white people” and then cited a number of individual cases where white people were killed and there was not the same level of national outrage as seen with the death of Michael Brown.  I tried to explain my point of view, and took pains to ensure I was presenting it in a way that wasn’t inflammatory, charged, or judgmental.  In short, I tried to converse civilly.  The responses I received were not in this same tone, but I hoped that by trying to present myself as rationally and cool-headed as I could, we could have a productive conversation. 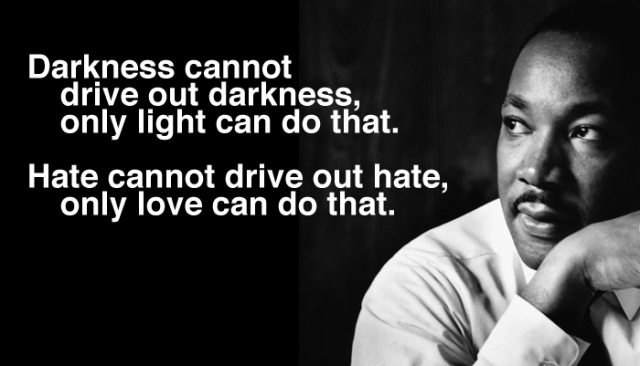 Recently, I’ve remained largely silent on social media regarding the issues of racism in this country that have been surfaced by the events in Ferguson and New York City.  I’ve had a hard time processing through the events, switching from anger… to disappointment… to any number of emotions.  Silence isn’t a good solution (or a solution at all), but it was the best I could do at the time.  I supported other’s posts, though likes, but largely shied away from commenting or posting myself.  I just wasn’t ready to process my thoughts in a public forum.

There has been some research into engaging in political and contentious discussions online.  It reveals again and again that we tend to surround ourselves with those that share our viewpoints.  An article from researchers at the Georgia Institute of Technology and the University of Minnesota found that:

“The behaviors of our participants around contentious events revealed effects of increased polarization and congregating with like-minded others. Those with the minority opinion in their group of friends disappeared from the conversation, and weak ties, those most likely to present different views, were more brittle to these arguments. Together, they create politically like-minded cloisters in social media.”  (Grevet, Terveen, & Gilbert, 2014. p. 7)

My friend in this case is what the authors would consider a “weak tie.”  This individual is an acquaintance whom I’ve known for a few years, but I wouldn’t classify as a close family member or friend.  The individual and I also no longer live in the same state, which decreased the regularity of our in-person communication.  The findings from the authors bear our that this type of friend that is most likely to unfriend:

“Most drastically, ending a friendship can be the result of a heated political argument. Among the 33 dyads mentioned during the interview, three were no longer friends. These relationships were all weak ties based on past common background, such as high school friends and they had not seen each other in many years. This confirms findings from [25] that people unfriend more weak ties than strong ties.”  (Grevet, Terveen, & Gilbert, 2014, p. 5).

It’s unfortunate, but at least this helps me begin to understand what happened.  The Pew Research Center also conducted some polling and research in this area.  Amongst many other interesting findings, they found that 26% of Facebook users reported hiding, blocking, or unfriending someone who posted abut political viewpoints with whom they disagreed.

It’s not that there aren’t opportunities for changing this reality, there are.  I encourage you to take the opportunity to read the referenced articles as they suggest “solutions” to these issues.  As I’ve said before, social media is a tool.  How we choose to use social media matters.  Its important to think about how we use social media.  Social media is not good or bad in and of itself.  (The designers of these sites have a role to play, too.  For instance, the algorithm that determines your news feed has a large impact on what you see more often and what you don’t).

As for my reaction to the unfriending, it finally helped me find my voice.  Rather than making me want to shy away from engaging in contentious issues online, it makes me want to do it more.  When there are issues that are important to me, that I am passionate about, that are issues of social justice, equity, and fairness, I need to speak out and I want to speak out.  I knew this before, but this experience gave me the nudge to not be afraid to process through those issues, perhaps even in a messy way, online and in community.

Those whom I choose to surround myself need not agree with me on every issue, but they must agree that the only way to address issues is to discuss them.  Social media may be one avenue for that, but not the only. Some issues may be better discussed offline or in mediums where more authentic connections can be made.

So although I had a friendship “taken away” I find myself with a surprising gift in return.  I learn.  I move forward.  Rather than be an upsetting experience, it was an inspiring experience.