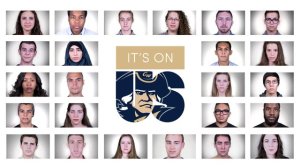 Last year, the White House initiated the “It’s On Us” campaign to help bring awareness and seek a solution to on-campus sexual assault.  It also proactively seeks to change the cultural attitudes on campuses that lead to environments where sexual assault is permitted.

The George Washington University heeded this call to action and created a series of videos featuring campus administrators, faculty, coaches, athletes and student leaders.  Take a look at their campaign video below.

GWU also created a toolkit for others to participate in the campaign including logos, suggested hashtags, and tweets.  So far the campaign has sponsored a series of different videos:

This is a post from my ongoing effort to highlight interesting examples of colleges and universities doing social good through the use of social media.  Check out past examples here.  Have an example to share?  Tweet me.

← 5 Outcomes #PechaKucha Presentations Can Teach You
MORE #StudentAffairs in LEGO →