The Time I Visited JetBlue Headquarters

As my friend Keith said, “The circle completes itself.”

When I started traveling and interacting with JetBlue on Twitter, I never intended nor thought my journey would take me here… and yet, nevertheless, this week had me heading to JetBlue’s Long Island City headquarters to present to the crew members of JetBlue.  I had the opportunity to tell my story and present on my experiences being a loyal customer.

If you’ve followed my journey with JetBlue, you know that it’s been a bit “unconventional.”  What started with a simple tweet became something so much more.  As my invisible travel companions along my journey of rediscovery, every one of these people touched my life in some way.  And they were friends I never met… that is, until earlier this week.

It was an immense privilege and honor.  JetBlue’s social media team showed up in force to hear me talk… some of them even flew out from Salt Lake City on a red-eye flight.  It was an incredible (and surreal) experience.

The video of my talk will be forthcoming, but there is one slide/concept I wanted to share with you now.  And it’s this one: 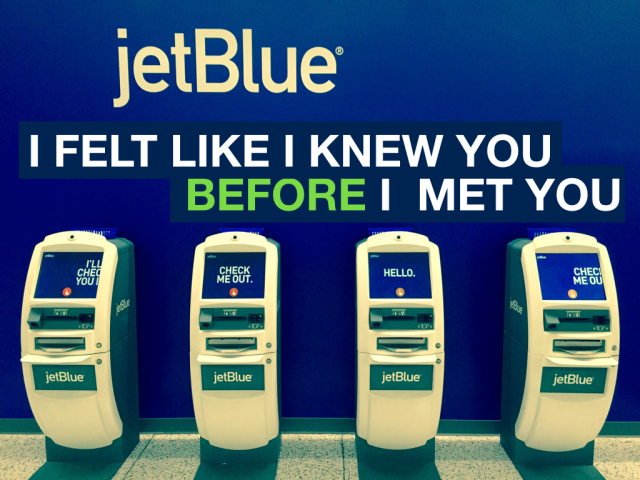 As I reflected back on my experiences with JetBlue, I realized that those simple twitter conversations tied me to a organization in a way unlike any other.  It seems odd (perhaps even crazy) that one can develop a relationship with a corporate twitter account that changes one’s entire point of view, but it happened.  As a result of our fun on Twitter, whenever I’d show up at the airport… I’d be excited to fly… excited to interact with a crew member who had no clue who I was and yet I somehow I felt like I knew.  I wanted to go to the counter and say, “Hi!!!!!  It’s me!!!!  Let’s fly!  How’s your day?  Isn’t this fun?”

I think it’s a testament to the power of a mindset.  A mindset that looks for the positive and views situations as opportunities.  For me, this growth mindset is at the core of inspiring humanity.  As someone who has worked in higher education for a number of years, it reminds me that we’re here and we’re doing something exciting!  We’re helping people reach their dreams. We help pick them up when they fall.  We celebrate with them when they have successes. We get to be a part of their journey.  We’re in this together.

(A special thanks to Jonathan and Chelsea for making this happen.)

← 10 Tricks to Appear Smart in Meetings (from thecooperreview.com)
Named one of the “Top 50 Blogs to Follow in HigherEdTech” →

3 Comments on “The Time I Visited JetBlue Headquarters”