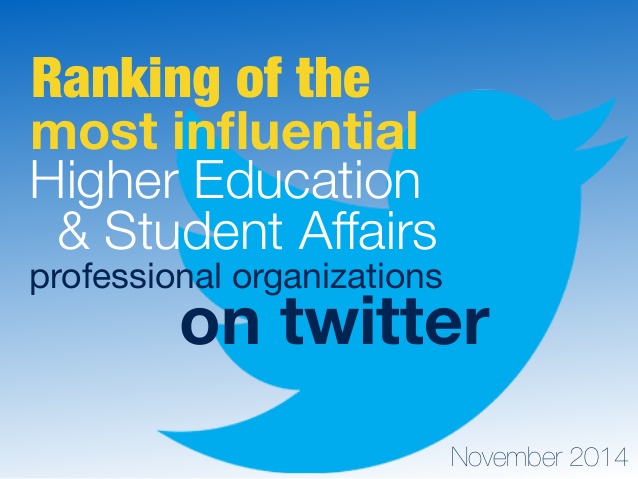 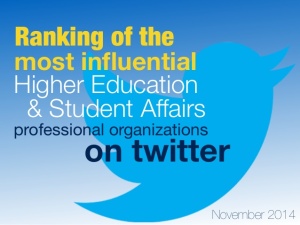 Having a social media presence is increasingly becoming a requirement for any organization.  I was interested in how the professional associations in higher education and student affairs engage online, so I decided to take a look at their Twitter presences and put together a ranking of the “most influential” associations.

The metric I chose to use is each organization’s Klout score.  Klout is a company that uses a proprietary algorithm in an attempt to quantify the “influence” of an organization.  Klout scores range from 1-100, and it becomes exponentially harder to raise one’s score the higher it gets.  Influence isn’t derived from how many followers one has, although that is a part of the calculation, but how many individuals engage with the content that an account shares and creates.

Admittedly, this isn’t the perfect measure, as no one but the company knows exactly what goes into the calculation, but it is one of the few publicly accessible ways of measuring social media influence and impact.  Additionally, it should be noted that Klout scores can incorporate more than just an organization’s Twitter presence in calculating their score (Facebook, Instragram, etc. can play a role in the calculation too.)

As a secondary ranking, I have also indicated the rank (1-10) of each organization’s twitter follower count.

Take a look below.  Not surprisingly, you’ll find EDUCAUSE, the IT-focused Association ranks number 1 (and number 2 behind the NCAA on follower count).  Data was collected on November 15, 2014 and includes all CHEMA (Council of Higher education Management Associations) members.