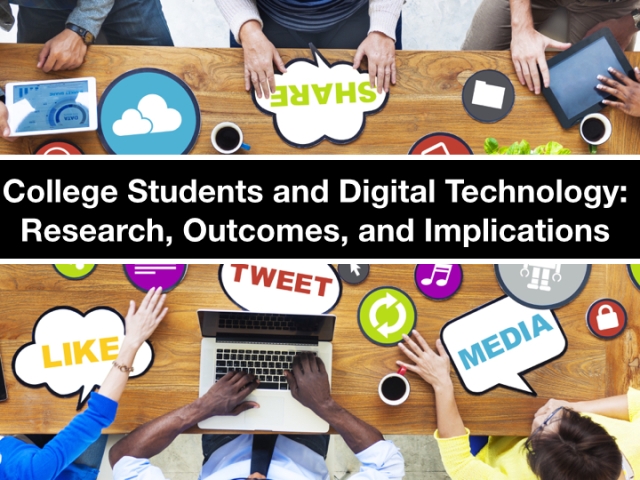 At the 2015 ACPA and NASPA National Conventions, we’ve brought together a group of four researchers (1 newly minted doctor and three soon-to-be) who study social media and technology and their effects on college students.  In this panel, each researcher will present a brief overview of their work followed by a question and answer session.  Come learn about our work, our research process and where we think the future of social media and technology scholarship is taking us.

This panel presentation brings together four emerging researchers studying the implications of social media and digital technology on higher education and student affairs practice.  Each researcher is completing dissertation work and will present initial findings from their research and implications for practice in student affairs.  This session will also address research design issues in social media research, moderated by a leading scholar in the field, along with audience question and answer.

Heather Rowan-Kenyon, Ph.D., is an Associate Professor in the Higher Education program at Boston College.  Heather’s work focuses on access and success, particularly for students underrepresented in higher education.  She just concluded a grant examining the influence of digital technology on engagement for first-generation college students.  She is the Associate Editor of JSARP and a member of the JCSD editorial board.

My study seeks to respond to the following call from LaRiviere, Snider, Stromberg & O’Meara (2012), “Educators have a responsibility to help students wield social media as a tool that educates, strengthens commitments, and contributes to social change” (p. 16).  There are positive and negative results of college students and teens using social media that must be considered when looking to teach students on how to be leaders online.  The purpose of my study is to understand the perceptions and experiences of student leaders’ use of social media and the meaning they make of digital technologies in their college experience. Through a mixed methodology I am is seeking out an understanding and definition of digital student leadership.  This research strives to contribute to the existing literature on overall teens and young adult social media usage, how college students make digital decisions and discover how identity is played out online as a leader on campus.  This study seeks to demonstrate methods students can utilize social media as positive devices in student leadership practices.

Lynk Wartman and Martínez Alemán (2009) studied college students’ use of social media and technology and recognized the amorphous nature of their online identity presentations.  Identity play and how one psychologically constructs a sense of self is complex and fluid in these spaces, something Smith (1994) notes as “the especially problematic status of selfhood in our time” (p. 405).  My research is an attempt to begin to understand how social media and digital technologies may problematize current understandings of how traditionally-aged 18-24 year old college undergraduate students develop.  It is a qualitative study focusing on heavy users of social media and digital technologies in an attempt to provide a glimpse at what college student development may look like in the future as the boundaries between the person and machine begin to break down. 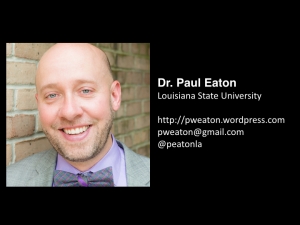 My research seeks to provide insight into the potential role that social media play in the development of college student civic engagement behaviors and perceptions.  Civic engagement is seen by many as an activity that serves not only as a key component to the maintenance of a democracy, but also as a force that sustains social ties across communities small and large (Colby, Ehrlich, Beaumont, Rosner, & Stephens, 2000; Putnam, 1993; 2000).  In order to understand civic engagement among today’s students, the mediating role of social media must be explored.  University administrators, faculty members, other educators, researchers, and those within the technology industries may benefit from the data themes that emerge within this qualitative study.  In particular, issues of trust, engagement, social capital formation, polarization, and information gathering and sharing within online environments among college students are all explored.

Birnbaum, M. (2013). The fronts students use: Facebook and the standardization of self-presentations. Journal of College Student Development, 54(2), 155-171.

Morrison, A. (2014). Facebook and coaxed affordances. In A. Poletti & J. Rak (Eds.), Identity technologies: Constructing the self online. Madison, WI: The University of Wisconsin Press.

Turkle, S. (2011). Alone together: Why we expect more from technology and less from each other. New York, NY: Basic Books.